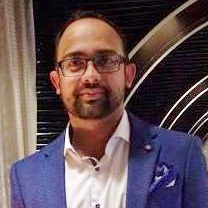 Consultant | Public speaker | Solutions architect | Developer with a unhealthy fascination for distributed systems. Not in that order. I’m currently based in Melbourne and work for Telstra Purple.

Since my early days of playing with VB5, C++, ASP and PHP 3, software development has gone through a paradigm shift. Join me on my journey through the world of .NET and all things distributed.

I’ve been working with ASP.NET/CORE MVC and WebApi for a while now and there is a problem I often run in to. It’s the case of the fat/bloated/god controller. This is a fairly simple problem to diagnose and most developers I speak to understand why this is an anti pattern. But why does it keep happening and how do we prevent it? What makes good developers fall into this trap?

Typically in a greenfield project you start with clean a controller and has a few endpoints. You have some sort of domain layer or a mediator that the request gets dispatched to. So you end up doing some sort of mapping in the controller action method to transform the request parameters to a known type of view model as required. All good so far. The code base is manageable.

But then your project grows and the domain evolves. It’s no longer easy to make a judgement call as to what controller your action methods should sit in. Do you create a new one or do you reuse an existing one? This becomes doubly hard in the case of REST as you really need to understand your domain before you define your resources.

The developers often take the path of least resistance/effort and use an existing controller when adding new features. This leads to further dependencies to the domain layer and mappers being introduced in the controller (aka coupling). If you’re using dependency injection this usually means that the constructor signature keeps growing in size. If you have any controller level unit tests, this results in unnecessary dependencies (majority) requiring mocking when you’re trying to test a single action method. (TBH I don’t see big value in controller unit tests anyway. Why not write integration tests for this purpose?)

The above takes little to no effort to do but over the long run your controller becomes bloated and fat. Your controller now does many things in the domain like some sort of god. This is what we were trying to avoid but the controller ended up being a victim of circumstance.

The longer this keeps going on for, the harder it becomes to make decisions about the domain. Often new developers will look at the existing controllers, see a related feature and then chuck the new feature in there as well. This snowball effect makes the controller boundaries really hard to reason with. It often gets worse in proportion of how long the project has been running. What started out as a simple problem now takes considerable thinking and refactoring to weed out. If the business isn’t willing to use resources to improve tech debt, then the developers quietly keep accepting the bloated nature of the controllers as inconvenient reality and move on.

The velocity of adding new features and consistency of your API gets affected in the end. This means a higher cost for the business to maintain the code base.

There is no magic bullet. In the end this really does come down to how empowered your development team is. Do they have the autonomy to deal with domain changes and refactor the current controller or API surface? Does the business work with the development team to prioritize tech debt? Are the developers disciplined? What does this mean to the API consumers? All very complex questions with no clear answers.

But is there a pattern we can embrace that directs us towards the pit of success? IMO the point which is most important in the workflow is when we decide where the action method goes. What if we introduce a pattern where each new action method sits in its own class and file? This way the developers always follow the pattern and create “endpoints” as required. Routing becomes a secondary concern.

I’ve thought about this for a while and came up with this pattern of “Endpoints”. I implemented it as a library so other people can use it.

The library is called SimpleEndpoints and is hosted on GitHub.

SimpleEndpoints has a concept called an Endpoint (Don’t confuse it with this). In this context think of an Endpoint as a controller + action method. Your API will consist of many of these endpoints.

Let’s start with an example.

I’ve had good success with creating a folder structure like below. 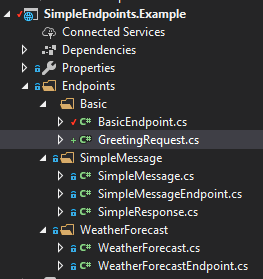 You can take this one step further and create a folder per feature group, then put each endpoint specific folder inside that if you want as well. I recommend keeping the view models in the same folder as it’s easier to find related code when they sit next to each other.

We looked how the controller pattern can get abused and turn into something that’s hard to maintain. The SimpleEndpoints pattern makes your endpoints concise, clear and lightweight. This will make it easier understand and reason with when your project eventually evolves. You can find more example in the GitHub repo and I will keep improving it to support edge cases while allowing 90% of the scenarios through conventions. That’s the plan at least.

Please leave any comments or feedback here. If you have a cool feature idea, please raise a pull request in GitHub. Thank you. 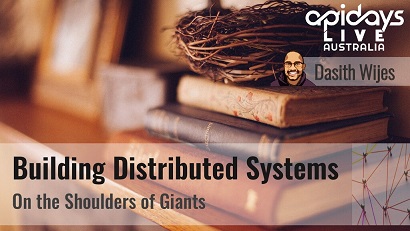 Converting a Visual Studio database project to use DbUp migrations

Database projects in Visual Studio have been a very popular way to develop and manage the database schema and logic in the past. With more and more applicati...

I was working on writing integrations tests for an AspNet Core Web API project recently (I blogged about how to write integration tests here). The front end ...

I’ll be speaking about some of my Microservices scars at the upcoming API Days conference to be held at Melbourne convention & exhibition centre. My talk...